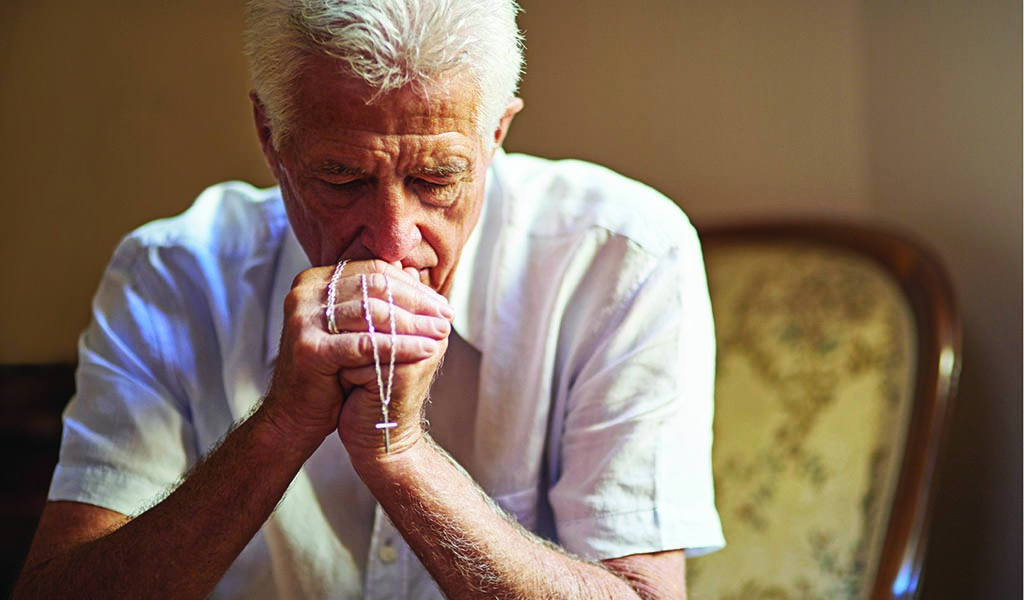 Fr. Paul Coury on The Stages of Prayer

In a lifetime most people go through six stages of prayer. Find out which stage you are presently in.”

This article is reprinted from an interview with Fr. Paul Coury by Michael Brown, Managing Editor of the  Tucson Catholic in their August edition. Reprinted with permission.

How and why people pray depends in large part on their stage in life, said Fr. Paul Coury, director of the Redemptorist Renewal Center in Tucson. “For little kids, it is lifting your mind and your heart to God. You pray to God. You have rote prayers you pray,” he said. He recalled his own childhood with a Melkite father and a devout Irish Catholic mother, where praying was an integral part of every day.

In their lifetimes, he said, most people go through six stages of their prayer lives. The first stage starts at birth through the time people go to college. “Children are into the program of their parents. They are going to church. They may not like it, but they go because the family goes,” he said.

The second stage begins when they go to college, the first time they are living on their own. “Some kids then become very involved in Newman Center. They become very spiritual and are into social justice,” Fr. Paul said. “We had a group of Jesuit volunteers, kids who were in college, and they came here for retreat and went across the (US-Mexican) border and back.” A larger number stop going to church altogether.

The third prayer stage comes after college, when young people start to date and think about settling down. He called this stage “Love and Marriage” and described the process – along with the typical conversation – this way: “That’s the big phase. ‘I fall in love with a girl. She’s really Catholic. She wants to get married in the church. We have to go for instructions. Can we get married in a park? No. We are getting married in a church.’”

Stage four occurs when children are born into the family. “How are you going to raise the baby? Are you going to have a baptism?” he asked. “Good schools, good churches – it’s important what you do with the kids.”

One parent told him that when the children were sleeping quietly, she just stood there, feeling an overwhelming connection to all children throughout the world – I love all of them and they are all part of me and I am all part of them. “That’s a sense of God’s presence. It’s magnificent,” he added.

With the empty nest comes the fifth stage, when “emptynesters” move to take the leadership role in the church. “They are super-churchgoers,” he said. “Ninety-five percent of our church is older, retired people. They want to get spiritual. They want to feel God in them.”

After a lifetime of working and raising children, “What else do they have to do? Become a bagger over at Fry’s?” he asked. “They have golf and stuff, but they like church.” Fraternal organizations and church social clubs are also meaningful. “Knights of Columbus are big,” he said. “It’s meaningful, it’s something in church. That’s a transition.”

The final stage comes as people begin to face the onset of sickness and death. “You walk with them through that period of life where they get sick and then sicker, and then they go into hospice and they pass,” he said. Many come to a deeper spirituality. “It’s amazing. They come to a real restful place,” he said.

“One who died recently used to tell me in her last month, ‘Well, I am living for Jesus right now, that’s all. I am just living for Jesus. That’s what I’m doing.’ Before that, she was a very active woman,” he continued. “At first, when she got cancer, she just said, “I just want to get better; I want to get back to my life.’ Then she came to a place where she got this great spiritual energy. She was great the last month.

Praying Your Way Home: A Spirituality of Aging

According to Fr. Paul Coury, there’s a spirituality of getting older. “It’s something I talk to a lot of people about. The natural tendency as people get older is to look at the past with regret. They think ‘Oh my God, it was terrible that I did that, and I didn’t do well there.’ Then they look at the future with anxiety because they don’t have much of it left. ‘What’s going to happen? Am I going to have money? How many years do I have left? What if I get sick? What if I get cancer?’ When they get older, people start worrying a lot,” he said.

“Spirituality is just the opposite,” he said. “People have to look at the past with gratitude and say, ‘Lord, thank you for getting me through that time in my life. That was a horrible time, but I got through it. You got me through it. Thank you, Lord.’”

As a person nears the end of life their spirituality deepens. “You look at the past with gratitude and get rid of that regret junk. Throw it in the cemetery,” Fr. Paul said. “Look at the future with absolute trust.”

Born and raised in Detroit, Fr. Paul has gone through the same thought process. “I go home, I see my aunts and uncles who are in their 80s.

None of them are doing well, the ones that are left,” he said. “I am thinking ‘I am 73. I’ve got 10 more years, maybe. What am I going to do for those 10 years?’ There’s a spirituality there of trying not to worry. Just trust that God has a plan and the Lord is in charge of the future,” he said.

Having regrets is natural. “When memories come up in the past that you regret, change those into memories of gratitude. Say ‘Lord, thank you for getting me through that really terrible time in my life. You blessed me by helping me through it.’ That’s a spirituality of aging.”