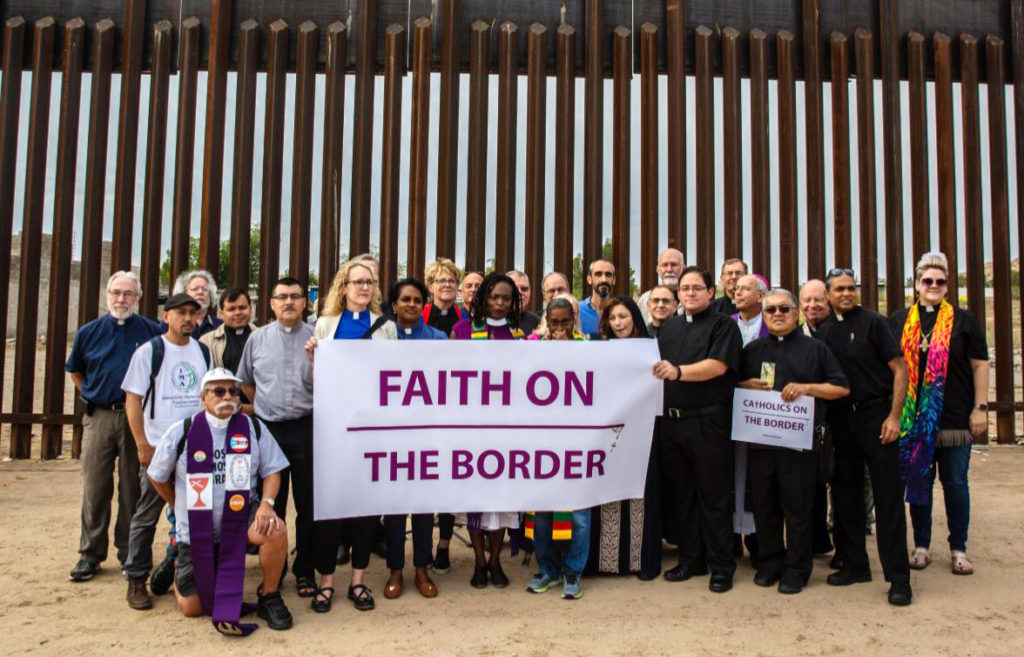 Faith on the Border: A Reflection on a Visit to the US-Mexico Border

Kevin Zubel and I participated in the “Catholics on the Border” program in El Paso, Texas on September 4 to 7. It was part of a larger ecumenical event that brought religious leaders from all over this nation to pray at the Mexican border for migrants and refugees throughout the world. Obviously, the event is timely and significant time was spent considering the families – mothers, fathers, and children – separated from each other due to immigration issues. Although the program did not provide a roadmap for resolution, it allowed us to simply encounter the reality of our country’s border with Mexico. It was a time for internalizing this moment in our national history, and our role in it.

Sadly, on September 6 a new policy was announced to establish family detention centers to house asylum seekers and refugees until their adjudication will be given. If that policy is implemented, families may be held in family detention facilities for up to three years. A native-American speaker spoke about America’s history of separating families in the story of African slaves brought to this country, placing native-American families on reservations and Japanese-American families in internment camps. The parallels were not discussed in detail. The images simply invited reflection.

Redemptorists celebrate Mass for the prisoners at a Core Civic Correctional facility in Tutwiler, MS. In July, the facility began housing asylum seekers and refugees for ICE. At this time, the institution has several hundred prisoners from different states, but a larger portion of the center appears to be dedicated to immigrant detainees. We are unaware if ICE plans to establish a family detention center in this prison, but the notion that it and other similar centers could become sites for housing families for lengthy periods of time is discouraging.

These centers are not equipped to provide education for children or language and vocational education for adult refugees to adapt to life in the United States. Internment camps have a sad history in the story of Japanese-American, Native-American and German prisoners of war camps during World War II. As bad as those camps were, today’s for-profit prisons are not nearly as comfortable as the Japanese internment camps or the German prisoner of war camps during World War II. And the story of reservations for Native-Americans is a sad chapter in this nation’s history.

Bishop Mark Seitz of El Paso and participants of the “Faith on the Border” program.

In the prayer service at the border, Bishop Mark Seitz said, “this wall is a sign.” It is a sign of all that divides and separates us as people, but we are brothers and sisters. Today, the wall is a sign of all that divides us but cannot be a wall that defeats us. Several speakers, including Bishop Seitz, said, “Who did Jesus identify with?” It was the poor, the homeless, the helpless, the migrant in a world that gives them no honor or respect. One speaker said, “God does not identify himself with me.” One could not help but consider the privileged life we live in this country. “God does not identify with me.”

I went to the border with experience and understanding of immigration law and policy and its effects on our community but did not expect to be called to reflect on my privileged life. Two weeks ago, I spoke at Mass about a spiritual writer who said that the antidote for feeling privilege is gratitude, and that virtue is found in generosity. I thought that the writer’s comment was profound but more profound is reflecting on Jesus’ words: “When I was hungry…. when I was thirsty…. when I was naked…. when I was a stranger….”