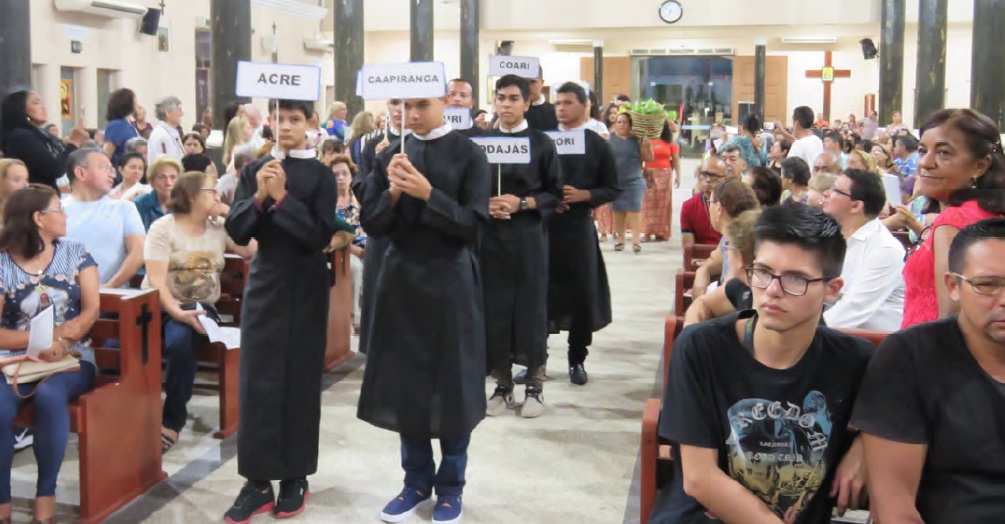 A procession featuring the missions established by Redemptorist missionaries; and Our Lady of Aparecida Church, built by the Redemptorists.

75 Years of the Redemptorists on the Amazon

The  Vice Province of Manaus  celebrated 75 years of Redemptorist presence in the Amazon Region of Brazil in July. The faithful joined confreres for a full week of special events that included presentations on Redemptorist spirituality, homage to Our Mother of Perpetual Help, and concerts featuring the music of St. Alphonsus and Amazonian religious music by the Raízes Caboclas Group. Fr. Rogério Gomes, a member of the General Council, shared an overview of the Redemptorist mission in the region, as well as the changes that are being made to address current ministerial needs. He presided at a Mass of Thanksgiving at Our Lady of Aparecida Church and Shrine on July 22, the very date that the early pioneers established St. Alphonsus House in Manaus in 1943.

At that time the world was at war, locked in a battle that claimed millions of lives and ravaged the nations of Europe and Asia. Fr. Francis J. Fagen was provincial superior of the former St. Louis Province, at the helm of a flourishing province that included 380 confreres, most involved in parish ministry and mission preaching. He was responsible for 26 foundations: 21 parishes, one major and two minor seminaries, a novitiate, and a retreat house. St. Joseph’s College in Kirkwood was packed with 115 students, and there were 17 novices and 75 students at Immaculate Conception Seminary in Oconomowoc, not counting the newly ordained priests. It was the perfect time for expansion.

A few years earlier, Fr. Fagan had tentatively agreed to establish a mission in the enchanting Kingdom of Thailand. In preparation, he sent Fr. Joseph Buhler and Fr. Joseph Elsworthy to Catholic University, where they earned MA degrees in religious education and psychology and were tutored in conversational French.

Military action in the Pacific disrupted the timeline of a foreign mission in Thailand, but no war could destroy or diminish the incurable optimism or the intense zeal of Fr. Fagen. When he received a letter from Rio de Janeiro through an official governmental messenger, he quickly called a meeting with his consultors. Dom João da Matta, bishop of Manaus, was offering the Redemptorists a mission in Manaus: two parishes serving 40,000 people in Coari and Codajás, as well as a residence in Manaus.

The United States government and Brazilian officials were collaborating on the economic development of the vast Amazon region, commonly known as the “Green Hell.” The bishop expected an influx of Americans, and needed the Redemptorists to help preserve the faith.

Despite the fact that the government wanted Americans – even the religious – in the area because it was the only available source of vitally needed crude rubber for the Allied war effort, the Redemptorist leadership believed the bishop’s letter was Divine Providence.

The early pioneers – Fr. Joseph Buhler, Fr. Andrew Joerger, Fr. John McCormick, Fr. Joseph Elworthy, Br. (Clement) Cornelius Ryan and Fr. James Martin –arrived in Manaus nine months later. They immediately began sowing the seeds of the Gospel and sharing their devotion to Our Mother of Perpetual Help. They invited a few people to join them in the humble visiting room of their first residence, which served as their parish church. At that time, Masses were celebrated in the morning, leaving the evening hours for other devotions.

A small chapel had been built within a year, and they officially inaugurated the novena on December 12, 1944. The crowds grew progressively as the devotion became known in the area. From Manaus, the missionaries went up the Solimões River and established communities upriver in Manacapuru, Codajás and Coari, and downriver as far as Belém.

Today between 10,000 and 13,000 people attend the novena every week, and three are broadcast on local radio stations. Our Lady of Aparecida Church serves as a reference point for the two million people living in Manaus. Brazilians far outnumber Americans in the ranks of the Vice Province of Manaus now, but these dedicated missionaries carry on the mission.