Making Her Known: Denla a Conocer

In 2017, the mission of the Redemptorists of Baton Rouge among the local Hispanic community began when confreres first accepted the role of chaplains to the diocesan Hispanic Apostolate. The pioneers of this new ministry included senior – but sprightly – members of the community all aged 70 or older, so the initial commitment was seen as a temporary help to the diocese until the chancery could develop a longer-term solution. But we know how these things go! Almost immediately, the Redemptorists at St. Gerard embraced the chaplaincy of the Hispanic Apostolate as an apostolic priority of the community and gradually started to introduce essential elements of the Redemptorist charism and spirituality. Those served by the Hispanic Apostolate in Baton Rouge represent 22 countries, each with its own devotions and patrons. We face a gentle balance in how we celebrate or introduce special feasts.

In our conversations with folks, we’ve learned that many were introduced to devotions to Our Mother of Perpetual Help in their hometowns in their countries of origin or in other parishes they’ve called home during their time in the United States. Therefore, we decided to “test the waters” this year and offer a triduum in honor of Our Mother of Perpetual Help to embrace our call to “denla a conocer” – to “make her known” more broadly in the Hispanic community in Baton Rouge. 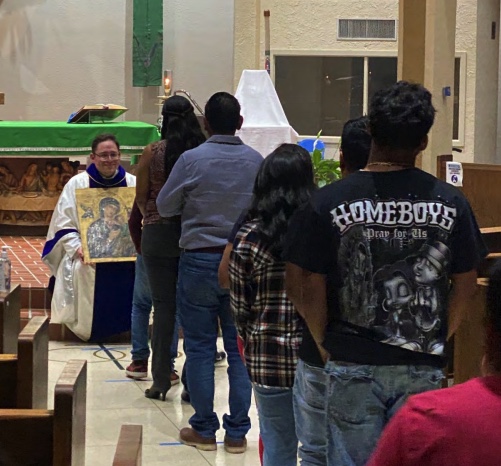 Planning the triduum fell into the hands of Br. José Antonio Montoya, a student from the San Antonio theologate who is assigned to Baton Rouge for the summer. Because there was no history of a formal Perpetual Help feast day celebration, Br. Antonio worked from a blank canvas. He produced a novena prayer card that combined traditional texts with other prayers from the Alphonsian tradition, and then wove the prayers into the existing schedule of Masses and the weekly Holy Hour. It so happens that this feast day also coincided with a visit to our community of Fr. José Luis Gómez García, a Redemptorist from the Province of Mexico who was in Baton Rouge to learn more about our community and apostolic works in southern Louisiana. Br. Antonio and Fr. José Luis collaborated in developing a preaching plan to cover the three days.

The triduum began on June 23 with a Mass celebrated by Fr. José Luis followed by the novena prayers. Br. Antonio animated the church with his talk on the Blessed Mother, creating “buzz” for the following two days. On June 24, Fr. Tim Watson celebrated Mass and presided over a Holy Hour during which Fr. José Luis led the novena prayers and preached on the theme of “Woman Standing at the Foot of the Cross.”

The triduum culminated on June 25 with a celebration of the Solemnity of Our Mother of Perpetual Help. Fr. Kevin Zubel presided at the Mass and Fr. José Luis preached on the history of the icon and the meaning of its various symbols. Turnout was higher than anticipated, and we Redemptorists were deeply touched to discover that Dania Flores, a musician who volunteered to lead music for Friday’s Mass, called together a youth choir for the solemnity.

The triduum was also an opportunity to reintroduce to the public a beautiful, hand-painted version of the icon that had been in storage for many years. Seeing the people line up to venerate the icon was profoundly moving and a powerful reminder of why we Redemptorists are blessed to have the privilege of introducing the faithful to our “Mother ever ready to help us.” Following the Mass, there were questions about the novena cards and the availability of copies of the image, signs of sincere interest in fostering continued devotion to Our Mother of Perpetual Help. Even more, people approached us with the question we all love to hear: “Padre, how do we make this celebration bigger next year?”

Get more information about Partners in Mission and
download our free booklet on Redemptorists spirituality:

JOIN OUR LITANY TO OUR MOTHER OF PERPETUAL HELP