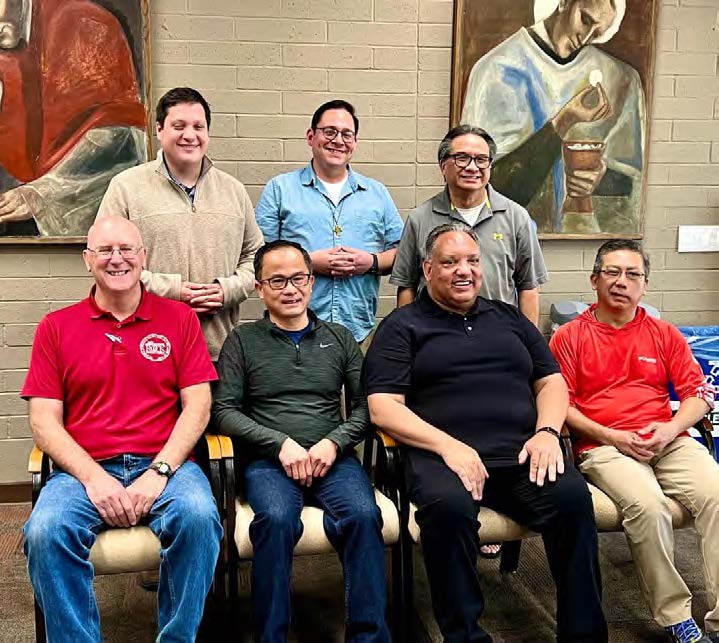 The Redemptorists of the Denver Province recently elected a new leadership team to serve during the 2023-2026 term. Rev. Kevin Zubel, C.Ss.R. has been elected Provincial Superior; Rev. Aaron Meszaros, C.Ss.R. has been elected Provincial Vicar; and Rev. Anthony Nguyen, C.Ss.R. has been elected Provincial (Second) Consultor. These members of the Ordinary Provincial Council will govern and manage the missionary activities of the Denver Province with four additional Redemptorists elected to the Extraordinary Provincial Council: Rev. Maurice Nutt, C.Ss.R., a mission preacher and a consultant to the Diocese of Jackson on the cause of canonization of Sister Thea Bowman, FSPA; Rev. Stephen Benden, pastor of St. Alphonsus “Rock” Church in St. Louis, MO; Rev. Binh Ta, C.Ss.R., who has been appointed Co-Director of Formation at the North American Theologate in San Antonio, TX; and Fr. Chuong Cao, Co-Director of Vocations in Houston, TX.

A diverse group, the newly elected leadership team brings a new energy and enthusiasm to the Denver Province, as well as a variety of perspectives and ministerial experiences. Fluent in English, Spanish and Vietnamese, they have served in formation and parish, preaching and retreat ministries, as well as in ministries specifically targeted to the Hispanic and Asian communities.

Father Kevin Zubel, 43, was a Certified Public Accountant when he entered Redemptorist formation in 2009. He professed temporary vows in 2012 and perpetual vows in 2015, and served his transitional diaconate year at St. Alphonsus Parish in New Orleans. Father Kevin was ordained to the priesthood in 2017 and assigned to the Redemptorists’ Evangelization Initiative in the Mississippi Delta. When the ministry was disbanded in 2020, he was assigned to the Redemptorists’ Hispanic Apostolate in the Diocese of Baton Rouge. Two months later, he was appointed Director of the Hispanic Apostolate. Father Kevin was elected to serve as a vocal representing the Denver Province at the XXVI General Chapter of the worldwide Congregation in October.

Father Aaron Meszaros, 37, grew up in the historic St. Alphonsus Parish in Grand Rapids, MI, which was staffed by Redemptorists until administration of the parish was transferred to the Diocese of Grand Rapids a few weeks ago. After earning an associate degree at Grand Rapids Community College, he entered Redemptorist formation in 2007 and professed temporary vows in 2010. He professed perpetual vows in 2015, and served his transitional diaconate year at St. Alphonsus Parish in Minneapolis. Father Aaron was ordained to the priesthood in 2016 and remained at the Minneapolis parish as parochial vicar until 2019, when he was appointed associate pastor of St. Alphonsus Parish in New Orleans. He was named superior of the local community in 2020. Father Aaron became the youngest member to serve on the Extraordinary Provincial Council of the Denver Province in 2018, when he was 33 years old.

Father Anthony Nguyen, 61, fled Vietnam with his older sister and brother after Saigon fell in 1975. They settled in Southern California, and he joined the former Oakland Province in 1983. He professed temporary vows in 1986 and perpetual vows in 1991, and earned a graduate degree in music composition at Holy Cross University in Portland, OR and a graduate degree in liturgy at the Graduate Theological Union in Berkeley, CA. After he was ordained to the priesthood in 1992, he was assigned as parochial vicar of Sacred Heart Parish in Seattle, WA. A year later, he was appointed to Holy Redeemer Parish in Portland, OR, where he served until 2000. He returned to Berkeley to serve in Asian Ministry until 2003, when he was named Co-Director of Formation at St. John Neumann House in St. Louis. Four years later, he joined the Mission Team as an itinerant preacher based in Chicago. After one year, he was assigned to a special apostolate ministering at Our Lady of La Vang Catholic Church in Santa Ana, CA, where he served until 2011. He was named director of the West Coast Mission Team based in Berkeley until it was disbanded in 2016, when he was assigned as a missionary in residence at St. Mary’s Assumption Parish in Whittier, CA. Father Anthony was appointed local superior and director of the Redemptorist Renewal Center in Tucson in 2019.

Are you wishing to deepen your prayer life this year? Our all-new mobile prayer app based on St. Alphonsus method of mental prayer is available free to you.

GET OUR PRAYER APP